I love watching movies, all sorts of television shows (except the latest craze on vampires) I can't stand them. Buffy and Angel were okay, but since then, it's all gone into this lovey dovey (twilight) sorta crap.

I'm addicted to CSI: Las Vegas. I didn't like Grissom and Warrick leaving, but the show has really picked up. I'm still more of a fan of the old episodes from season 1 to 6 though.

I love writing. I write books. I've published 2 so far, which can be seen here:
www.lulu.com/spotlight/Lolly4Holly


Just watched this childhood favourite again and it's still just as good as I remembered.

The young daughter of a politician, Savannah, runs away due to lack of attention in her life. Her father is busy with his career, sucking up to all the big shots, while her mother is busy trying to please her husband and all the people that her husband constantly brings home.

Savannah writes a note to her parents, telling them that she's running away from home, but they never find it. She hides in the car of two not too bright crooks, who are slowly converted into parent figures, after spending a few days with the adorable little girl.

Savannah really captures my heart in this movie. It's a great example of how a child in the midst of all of grownup reality, can see the innocent, carefree goodness of life and share it with everyone around her.

The Men Who Stare at Goats review


The advert for it looked a bit strange, but I finally decided to get it and glad I did. The first time I watched it, I stopped it about halfway because I was yawning so much with bordem. The second time I watched it, I managed to watch it from start to finish and actually really liked it.

Jedi psychic soliders that love to dance seems a bit strange and really out there, but the way that Ewan McGregor's character narates the story actually makes it worth watching.

The animal testing seems a bit odd too, especially the forcing kittens to inhale cigarette smoke part, but it's a pretty decent film.

If you liked 'Burn After Reading', you'll like this too.


I love this movie. It's not just another romantic comedy that ends typically, which is one of the reasons why I love it so much. Right from the beginning you can sense the tension between Jane and Jake, especially Agness thrown into the mix.

Meryl Streep is still one of the best actresses, and she proves it in this movie over and over again. Right from the start she gives us the full picture of her characters relationship with ex-husband.

Her relationship with her kids pretty much gives her a free pass on the infidelity angle, as she's a great mother and a really loveable character.

I love that it doesn't wrap everything up nice and neatly in the end either. Nancy Meyer's has definitely out done herself on this one.

Life as We Know It review


There are a few things about this movie that are really annoying. The first being the fact that we don't get to know the parents of baby Sophie very well, so we as the audience don't feel anything when they're suddenly gone.

Second thing is Holly and Messer's shock to being guardians of their baby. For Sophie's first birthday party, the parents ask if they can take a picture of their baby with her 'GOD parents', which just about everyone knows is the people who take care of the children if something happens to their parents.
Surely being named god parents is a big clue there, but it doesn't click for either of them.

I was quite looking forward to watching a romantic comedy with Katherine Heigl and Josh Duhamel, but it wasn't as good as I was expecting it to be.
It follows the plot of most romantic comedies with two characters who either don't know each other or hate each other, work through a crisis, no real surprises, because you know it'll all work out in the end... a little predictable.

The comedy pretty much revolved around the baby half the time, which makes you think if the baby wasn't in it, it would be really boring. I love the neighbourhood watch gang too, they're hilarious. But Heigl and Duhamel were a little disappointing.

Overall a 7/10 because it could have been a lot better.


Life never quite turns out how you expect it to.You never expect to lose someone you're close to, you never expect your family to lie to you about anything and you certainly never expect that one day everything you ever wanted is suddenly going to be forced upon on you and there's nothing you can do to stop it.Follow Joey and Micky's journey through their adult life, surviving break ups, lies and hidden truths that no would have ever expected to be true!
WARNING for Homosexual theme.
M/M SLASH relationship. Not for minors!


FBI Special agent Frank Castle had it all, a loving family, a great life, and an adventurous job. But when his life is taken away from him by a ruthless criminal and his associates, Frank has become reborn.

Now serving as judge, jury, and executioner, he's a new kind of vigilante out to wage a one man war against those who have done him wrong.

It's a pretty good film. Lot's of blood, gore, violence, and fast paced action, but you can easily tell it's right out of a comic, as nothing is real. Don't get me wrong, I love it, but there's just a few things that annoyed me.

The first one is that after fighting the russian, Frank is all beat up, barely able to stand, so they hide him in the elevator thing, while Dave and the tubby guy stay in his apartment. Once the bad guys have left, Frank is suddenly wide awake and able to walk again, barely affected by any of the damage he just took.

The second is near the end, after Mr Saint just killed his best friend and wife, he goes to the club, offering $50 thousand to whoever kills Frank for him. What I don't get is why they all suddenly start drinking champagne and hanging round at the club as if they're celebrating something, giving the Punisher the opertunity to kill them all.

The rest of it is great and Thomas Jane is a great actor, perfect for this role.


A teenager turns her babysitting service into a call-girl service for married guys after fooling around with one of her customers.
Hard to believe that the main character was ever a virgin at the beginning of the movie, but it's a really good film, very touching and thought provoking.
For teenage girls, the acting was actually really good, not the usual princesses with no facial expressions that you see a lot of these days.


Casper tells the story of how he became such a good-natured ghost.

No where near as good as the first one, has a certain lameness to it.


In the 1940s in the small town of Jupiter Hollow, two sets of identical twins are born in the same hospital on the same night. One set to a poor local family and the other to a rich family just passing through. The dizzy nurse on duty accidentally mixes the twins unbeknown to the parents.

Our story flashes forward to the 1980s where the mismatched sets of twins are about to cross paths following a big business deal to closedown the Jupiter Hollow factory.

Very funny movie of twins switched at birth. Every moment of this film is just hilarious. I would definetly watch it again and recommend to a friend!


The story of a forbidden and secretive relationship between two cowboys and their lives over the years.

A raw, powerful story of two young men, a Wyoming ranch hand and a rodeo cowboy, who meet in the summer of 1963 sheepherding in the harsh, high grasslands of contemporary Wyoming and form an unorthodox yet life-long bond--by turns ecstatic, bitter and conflicted.

Deleted
Posted: 7 years, 11 months ago at Jun 13 14:02
Thanks for supporting Authors with Mental Illnesses. =]

Joseph Grey
Posted: 7 years, 12 months ago at Jun 9 3:55
Thanks for voting on my "Favorite Faces" and "Iconic Movie Roles" lists!

Villiana
Posted: 7 years, 12 months ago at Jun 8 10:43
Thanks for votes on my Rutger Hauer evolution and my favorite animated series list

Moon River
Posted: 8 years, 1 month ago at Apr 29 18:50
check out my new creation:
Directors and Their Masterpieces

the giraffe
Posted: 8 years, 8 months ago at Sep 26 18:45
Thanks for the vote on my ruining my childhood list! 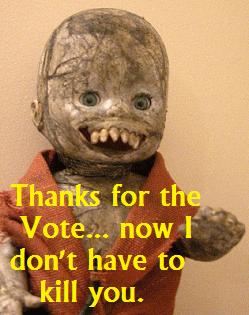